Recently I have published a post on galls, and one of the species that I briefly mentioned was the Moss Gall, formed by the Gall Wasps known by the scientific name of Diplolepis rosae. Today I have been researching this species, and I would like to share some of the interesting things that I have discovered.
Rosae's life cycle begins with the adult laying the egg in the Spring. Only a few males of the species have been found, so it is generally thought that they must reproduce asexually. The female will find a suitable host plant of the family Rosa (roses), then uses her ovipositor (an implement on the abdomen, rather resembling a sting, used to to deposit eggs) to lay eggs inside a leaf bud. When the tiny maggot-like larva hatches, it will begin to feed on the plant tissue around it. Though this part is not yet fully understood, it is thought that a chemical in the saliva of the larva stimulates the cells to enlarge and/or multiply, as I explain in my previous post (see the link at the top of this page). This is how the gall is formed. Even after the process begins, it is not always obvious from the outside of the plant. But eventually, the gall will spread out of the plant, creating a large outgrowth known as the Moss Gall. It is covered in long, green to red hairs - hence the name. It is often thought that the gall will become more red as it ages, however this is not always the case. 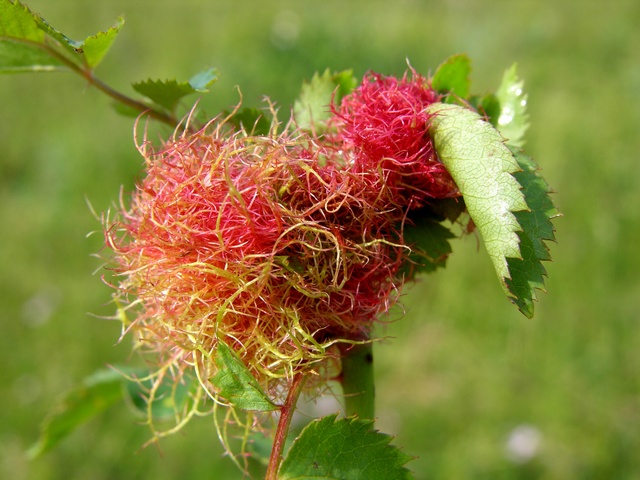 In this photo that I found the Internet, you can clearly see the long, curly hairs.

Several larvae may share a single gall, as seen here in this photo that I found on the Internet.

When Winter comes, the larvae will remain in their gall and take up the sedentary stage in their life cycle, known as the prepupa. This can be considered as a form of hibernation, as the prepupa does not move or eat. When Spring comes, it will shed its skin to reveal the true pupa developing beneath. In March, the adults begin to emerge, then the whole cycle is repeated.

In this image from the Internet, you can see the adult female's long limbs and thick thorax.

What an interesting life-cycle! I hope that you have enjoyed today's post, but if you want to find out more on Diplolepis rosae then there is plenty more information here.

A while ago I published a post all about some recommended books, which you can read here. For Christmas I got loads more great books, all of which I would like to recommend here:

Lost Animals: Extinction and the Photographic Record by Errol Fuller
This is a great book about animals that have fairly recently gone extinct - usually because of humans. If you like a nice jolly read that looks on the bright side of things, then this book might not be for you. Needless to say, it is very interesting with a nice balance of old-fashioned photos along with text. It includes some well known species such as the Tasmanian Tiger (Thylacine) and less well known ones such as the Kaua 'i 'O'o.
The only thing that I don't like about this book is that there are loads of birds and just a few mammals. I don't pretend to prefer one to the other, I just think that there should really be a few more mammals in there. However, all in all, it's a great read!
You can find it for sale on Amazon here.

Extinct Birds of New Zealand by Alan Tennyson and Paul Martinson
This book is a stunner. Wonderful, indulgent text and simply amazing illustrations. The species are painted in such a life-like way that it almost feels like you're right there in New Zealand with the birds. I also didn't find this book quite as depressing as Lost Animals for some reason.
Until I got this book for Christmas, I had no idea of the amount of bird species that we have wiped out on New Zealand. Many of them were hunted and eaten, some of them lost their habitat. Many died at the hands of Pacific Rats and domestic cats, all of which were brought over by . . . no prizes for guessing correctly. Yes, that's right: humans. We also introduced pigs, dogs, stoats, ferrets, weasels, possums, Ship Rats, and Norway Rats - all of which we think contributed to the extinction of many species.
Here's a link to it for sale on Amazon.

The Cambrian Explosion: The Construction of Animal Biodiversity by Douglas H. Erwin and James W. Valentine
This is a very in-depth, complex book about life in the Cambrian period, which ended 490 million years ago. I don't understand parts of it, but it is still a great book!
The Cambrian period was very interesting, as before that life wasn't really very diverse. But the Cambrian was really quite an exciting period, suddenly life took off, creating all kinds of weird and wonderful creatures! This phenomena is known as the Cambrian Explosion, and has been described as the 'Big Bang' of evolution.
It's a really good book, and most certainly worthy of my 'Great Book' list. You can find it for sale on Amazon here.

Relics: Travels in Nature's Time Matchine by Piotr Naskrecki
There are loads of amazing animals on planet Earth, all of them specially adapted for their own little nieche. But there are some life forms that are better adapted than others, life forms that survive mass extinction events and are around for many millions of years. These are known as living fossils, and are the subject of this fantastic book. It consists mainly of pictures accompanied by small areas of text to explain what's going in the photo. The pictures are some of the best that I've seen in a book.
Even a quick flick through the book makes it evident that the author is a big fan of Orthoptera. There are numerous species of Katydids (one of my favourite insects) and even a whole chapter on a new species of Cave Cricket that the author himself discovered!
Here it is on Amazon.

All Yesterdays: Unique and Speculative Views of Dinosaurs and Other Prehistoric Animals by John Conway, C.M. Koseman, and Darren Naish
If you like unique books and you like dinosaurs (both of which I LOVE!), then this is a book for you. The first part of the book looks at speculative views on dinosaurs, proposing previously unheard of theories on dinosaur behaviour. One of my favourite parts is about the polar dinosaur, Leaellynasaura. It is usually depicted as scaly and reptilian, but the authors suggest that it could actually have been fluffy and covered in fat to keep them insulated. Such fat and fluff would have trouble fossilising, so we wouldn't know that it was there.
The second part of the book is the oddest. It looks at how future scientists might reconstruct modern day animals if they went extinct, using techniques that we use to reconstruct dinosaurs. The results are both hilarious and fascinating. Some of my favourites include blood-sucking hummingbirds, elephants without trunks, and gremlin-like monkeys that very nearly gave me nightmares.
The whole book is filled with great illustrations; I'd definitely recommend it.
It is for sale on Amazon here.

The Savage Garden (Revised): Cultivating Carnivorous Plants by Peter D'Amato
This book tells you everything that you need to know to grow fascinating insect-eating plants such as Venus Flytraps, Pitcher Plants, and Sundews! This book covers everything from substrate and lighting to feeding and watering!
Here it is for sale on Amazon.

A Field Guide to Mesozoic Birds and Other Winged Dinosaurs by Matthew P. Martyniuk
This book is fun to look at, interesting, and informative. It is written in the way that you would expect a field guide of modern birds would be, with sections about the species' habitat, time, size, and biology.
The illustrations are stunning and really life-like, one of my favourite things about this book. It features many different species and loads that I have never heard of before. Definitely one of my favourite books.
Click here to go to the book on Amazon.

Monster Hunt: The Guide to Cryptozoology by Rory Storm
Cryptozoology is a fascinating subject about animals that may or may not exist. Cryptids, the group of animals that cryptozoologists study, include Bigfoot, Nessie, and more. They vary from very unlikely to exist (such as the Mothman and Dover Demon) to possibly existing (such as the Orang Pendek). Cryptozoology is one of my favourite subjects, but unfortunately it's rather shunned by most of the scientific community. This is a shame, and shows that many people like to think that we know everything about everything - which is very far from the truth.
This fun book features many different cryptid species, and is written in the style of a dirty notebook, with apparently tea-stained pages and rough sketches. It would be suitable for children as well as adults, and a great introduction to the study.
Here's a link to it on Amazon.

The British Natural History Collection: Moles by Rob Atkinson and Illustrated by Belinda Atkinson
It's high time that a good, informative book on moles was written. Wish granted, here it is! Moles are one of my favourite British animals and deserve a lot more attention in natural history than they usually get. This book is amazing, with beautiful illustrations and informative text. Very highly recommended!
You can find it here on Amazon.


I think that's about it, and I hope you might want to put some of these on this year's Birthday or Christmas lists
I would like to say a big thank you to my family for buying me such wonderful books. I love you! 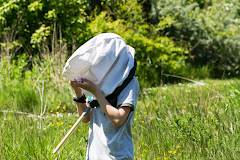